But the seminarians who spread out the world over to apply what they’ve learned in formation would tell you God continues to work in all circumstances. For the men in the seminary’s Theology I, II, III and IV classes, the circumstances were pilgrimages in the United States and abroad.

Kevin Soenneker (Diocese of Saint Cloud) and David Kirsch (Archdiocese of Saint Paul-Minneapolis) experienced this reality in their respective pilgrimages to Mexico and Rome over J-term. Soenneker, currently in Theology II, traveled to the land of Our Lady of Guadalupe with his classmates. Kirsch and his Theology III class, along with Theology IV, went to the Eternal City.

All trips involved various cultural experiences – and challenges. In the end, however, the men said they returned with one thing in common: transformed hearts.

Theology I Seminarians Attend March for Life in Washington D.C. Every January, the seminarians at The Saint Paul Seminary spend time in different parts of the world depending on their year of formation. The men in Theology I spent the “J-term” in their home dioceses, getting acquainted with parish and diocesan life.

The end of their assignments culminated in the annual March for Life in Washington, D.C.

Hundreds of thousands gather every January in the nation’s capital to support the dignity of human life, from conception to natural death, and protest issues ranging from abortion to assisted suicide. Traditionally, the  Theology I seminarians participate in the march before the last half of their semester begins.

Additionally, there was another St. Paul Seminary connection at the nationwide gathering: Fr. Mike Schmitz. The 2003 SPS alum, best known for his “Bible in a Year” podcast, served as a keynote speaker.

“Every woman matters. Every child matters.” A 74-acre garbage dump inhabited by locals who make $4-$5 a day sifting through trash for recyclable material might be the last place to look for a smile.

Yet there plenty of them present this month at the Neza III landfill when The Saint Paul Seminary’s Theology II class — led by Rector Fr. Joseph Taphorn and Director of Human Formation Fr. John Floeder — spent the “J-term” ministering to the poor Mexicans who live and work there. In addition to celebrating the sacraments, the group spent time praying and conversing with Neza’s residents.

Through this encounter, the seminarians learned about an existence that is meager, tough and yet full of hope — mostly due to their Catholic faith, according to those who made the trip.

The seminary partnered with Hope of the Poor on the trip, which also featured a trip to the nearby Miguel Pro Museum. Blessed Miguel Pro ministered in Mexico City before his 1927 martyrdom.

The below gallery contains more photos from the seminary’s latest mission trip to Mexico. 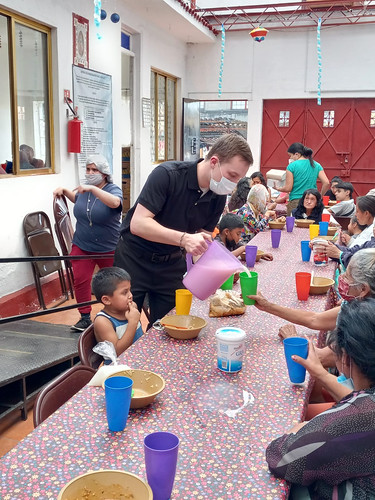 As they approach ordination to priestly ministry, our transitional deacons are experiencing the universal Church in Rome. Please keep them in your prayers during this time of study and retreat in the Eternal City.